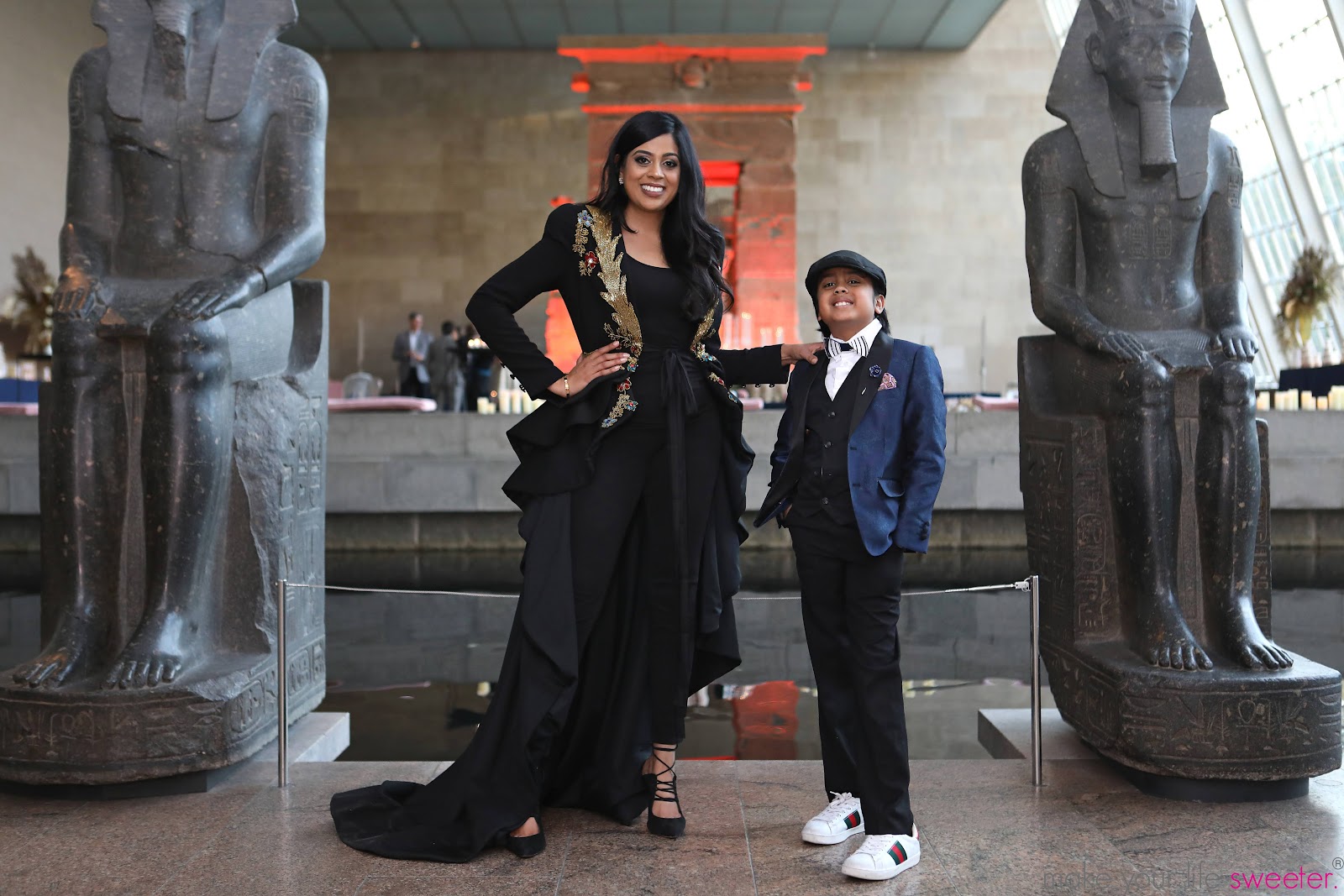 When Yasmeen shared with me that she would be celebrating her 6 years of sweetness at the MET I was ecstatic and shocked. I mean...a party... at the MET?... THE. MET?! Only months ago the most star-studded ensemble of celebrities graced the same steps at the MET Gala and I was going to walk those same steps to celebrate my friend’s success. NOT TO MENTION Yasmeen would be celebrating her success in none other than the Temple of Dendur, where the actual Gala dinner is held. *Gasp* How does Yasmeen do it? The past couple of years alone have been a whirlwind. She sprinkled her sweetness at the Forbes 100 Year Anniversary Party, Instagram, Facebook, and with the one and only, Oprah Winfrey. It is amazing to see Yasmeen build her empire while at the same time, illuminating as a single mom to her 10 year old entrepreneur, Zain. Only Boss Ladies can juggle life the way she does! Am I wrong? So the moment I got her invite, I booked the first flight to New York from Dallas. That’s how the Traveling Hijabista Flies. 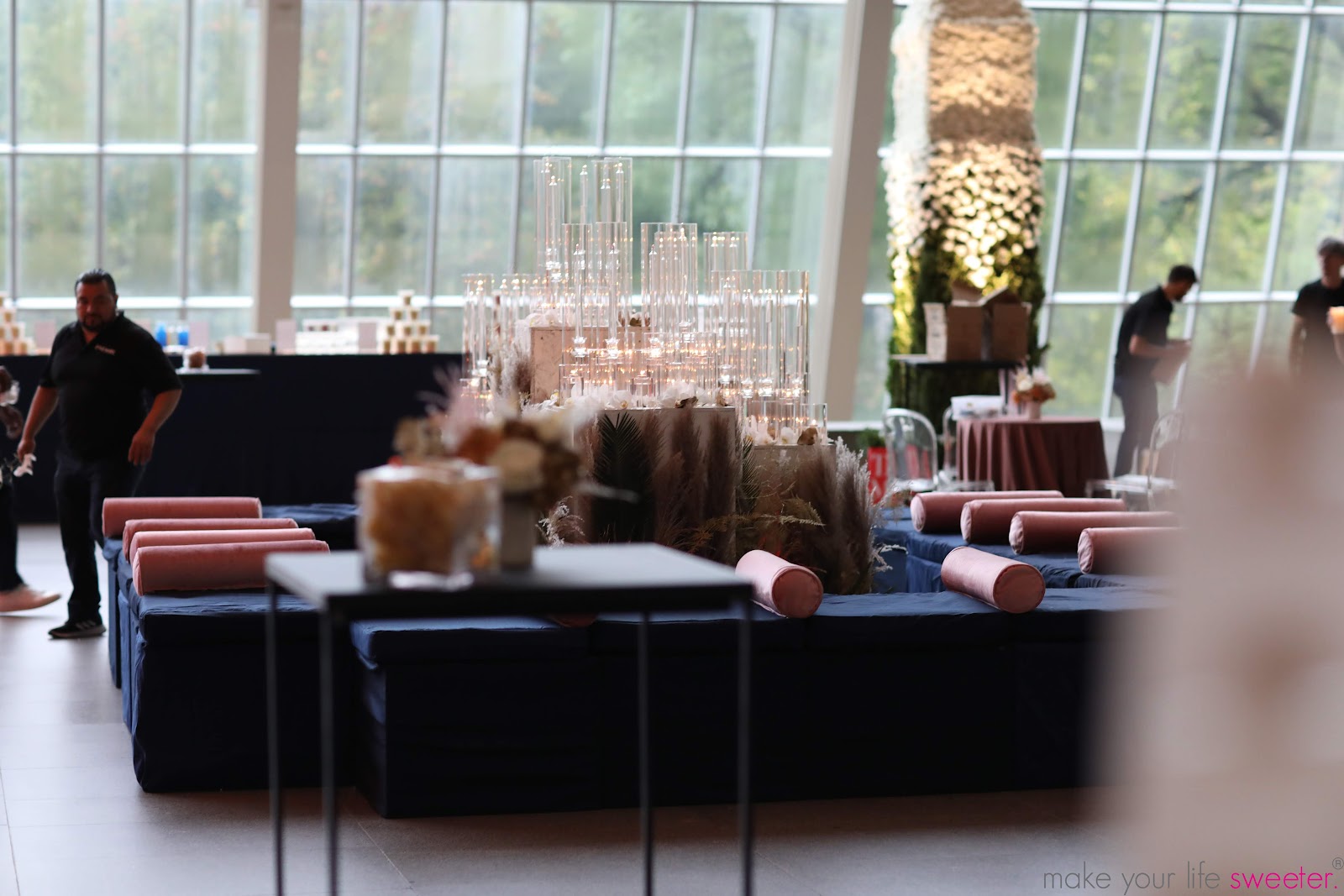 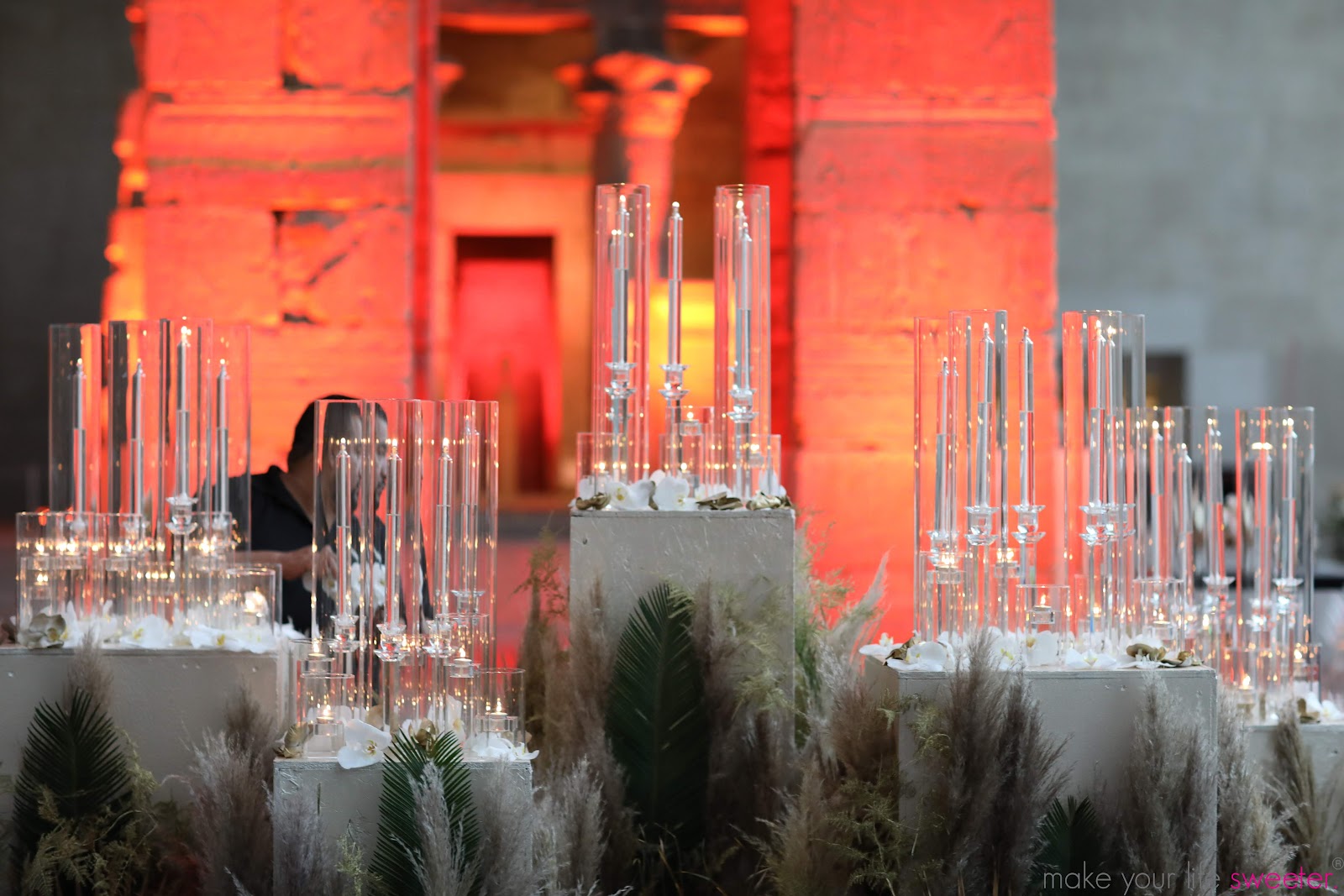 When I arrived at the MET with my girl tribe we were welcomed with hors d'oeuvres and cocktails. I was dressed in a long formal dress designed by Turkish designer, Rasit Bagzibagli which sparkled under the glamorous MET lighting. As a hostess escorted us into The Temple of Dendur, we all were stunned. Pillars of flowers towered overhead as a romantic palette of soft rose and velvety navy draped the room. Gilded flowers and candles gave the whole room a warm and inviting glow. Style by Marc’s florals and lighting brought a modern twist to the Temple and I just couldn’t believe that we were going to have mocktails in one of Egypt’s 1st century BCE Temples. As an Egyptian, I think my ancestors would’ve absolutely loved how Marc’s vision came to life. 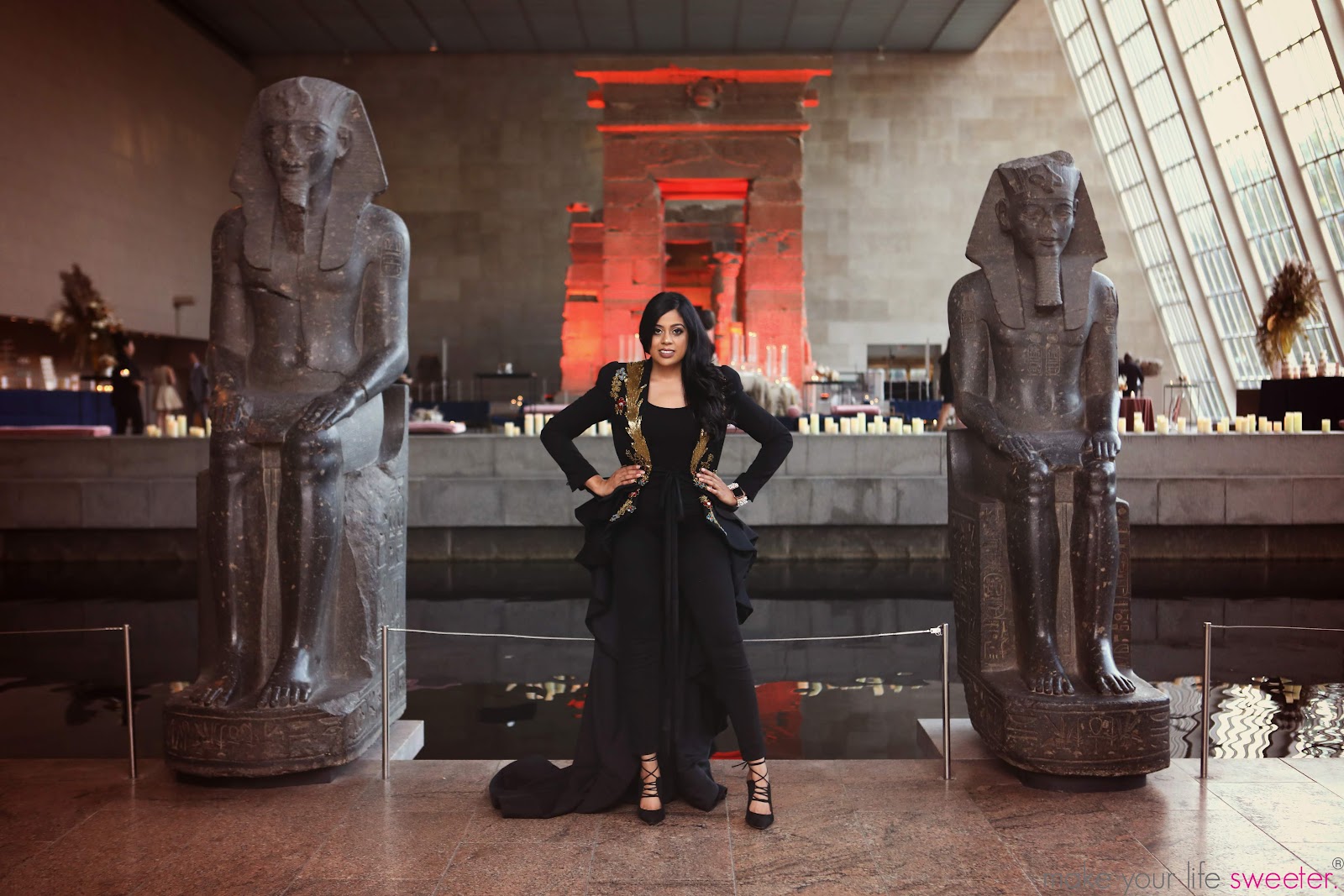 Yasmeen, wearing a stunning, embellished cape-like dress designed by Ese Azenbor, welcomed us to her sweetness wonderland, and yes, sweetness wonderland is a thing when you’re with Yasmeen. I had no idea where to start my sweet tooth journey. Every corner of the exhibit had one of Yasmeen’s signature pieces. 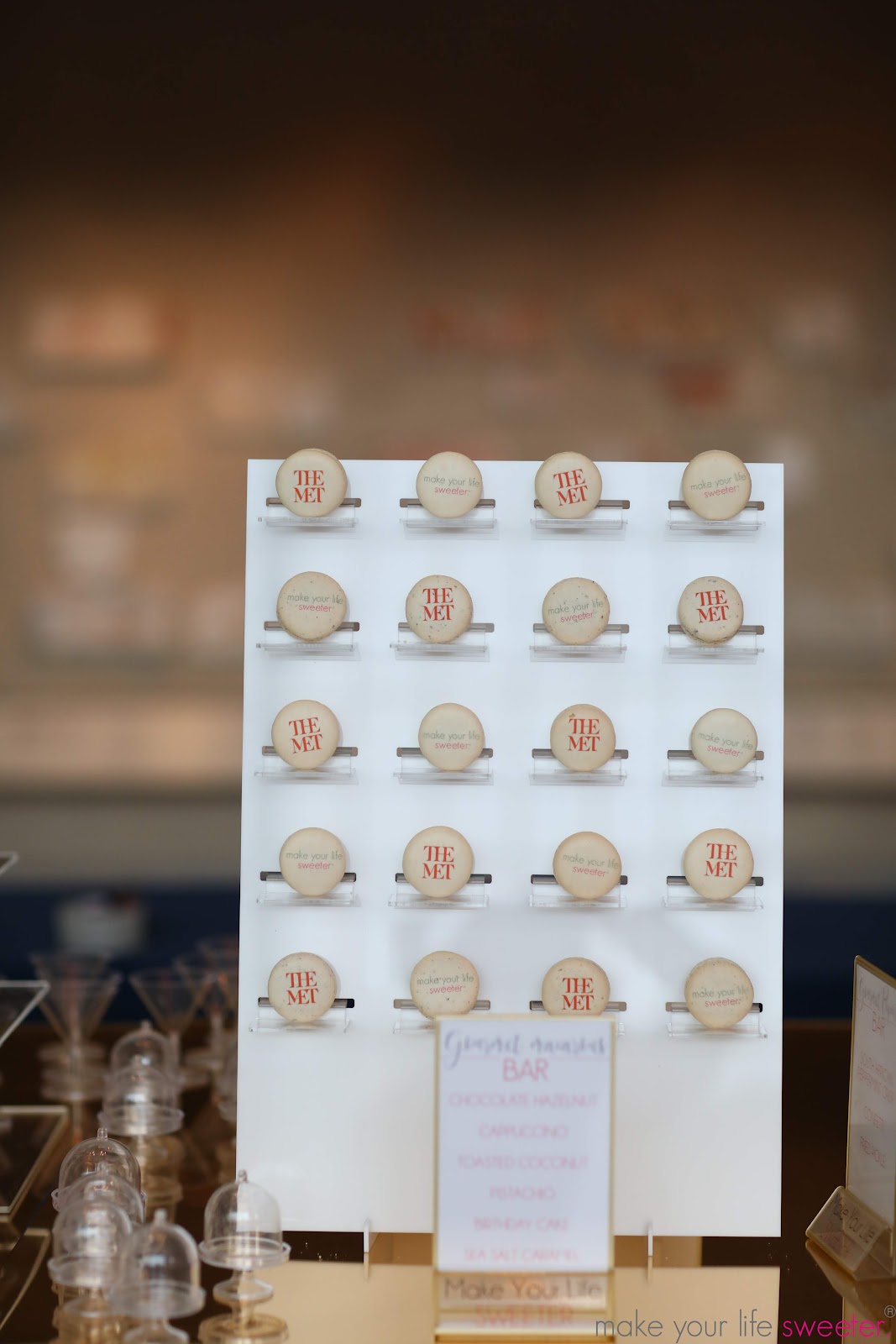 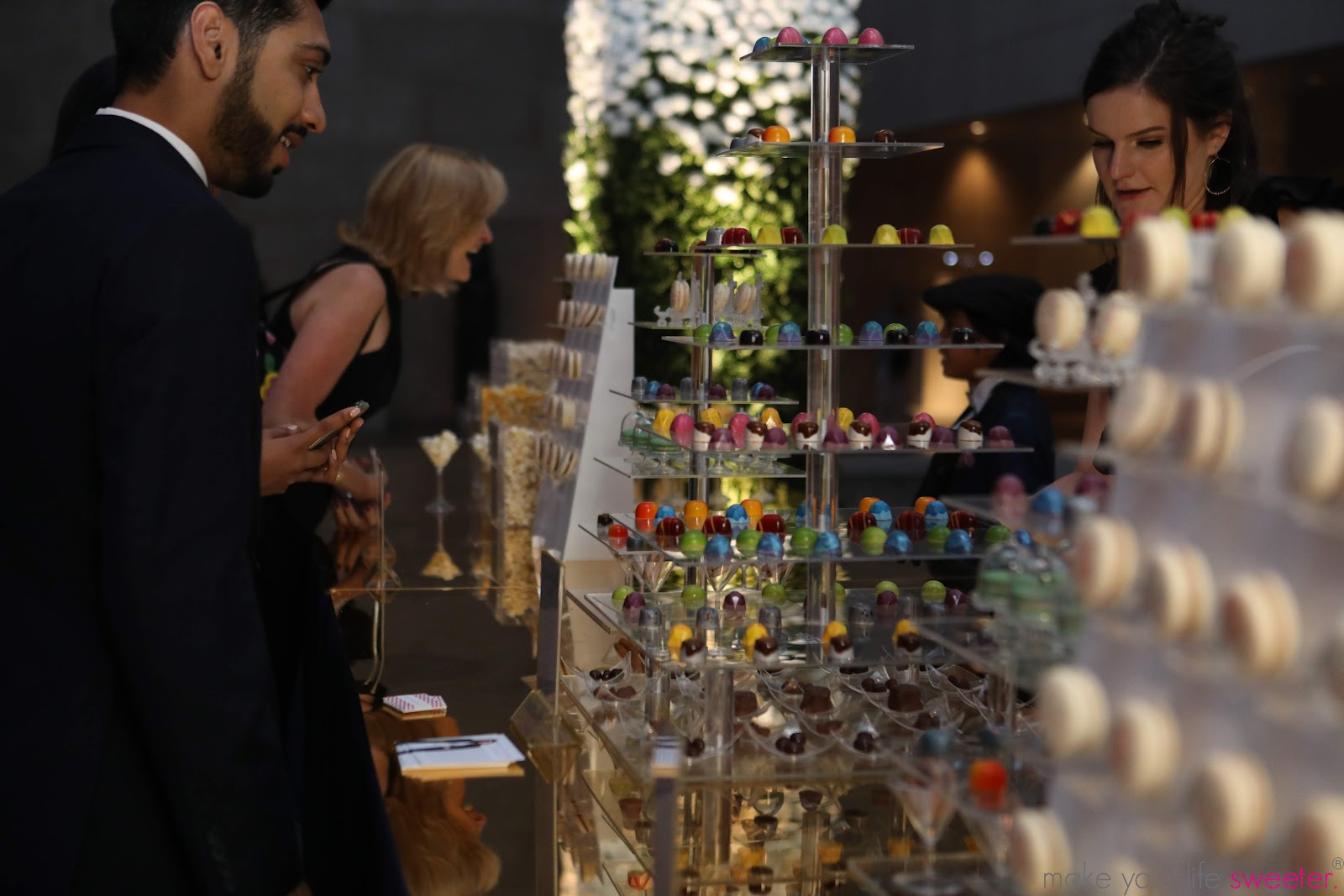 Ya’ll know how much I love chocolate, so I was instantly drawn to the tower of artisanal chocolate truffles. If you haven’t tried them, you are missing out! You absolutely have to try Yasmeen’s passion fruit flavor truffle. It is fresh, sweet and yet slightly tart; it’s perfection. 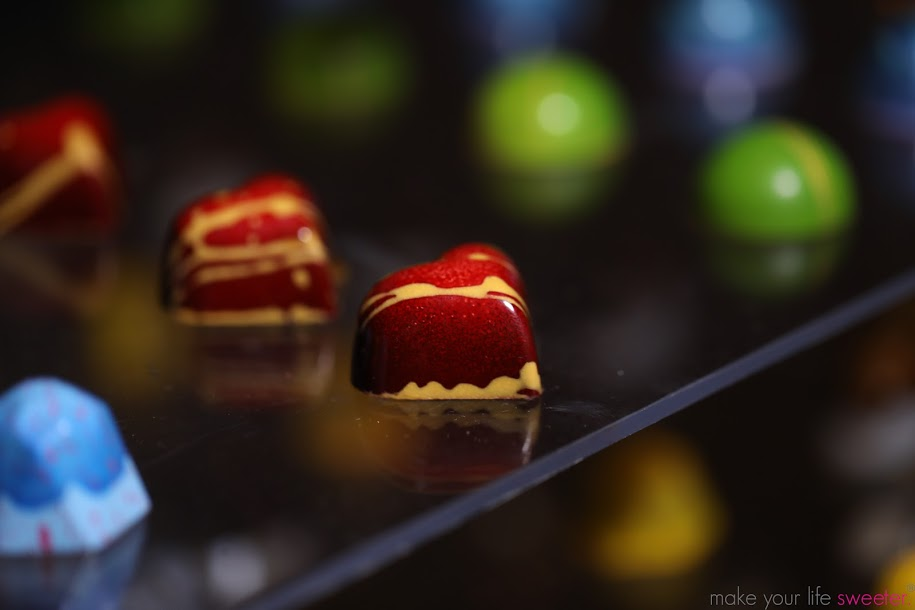 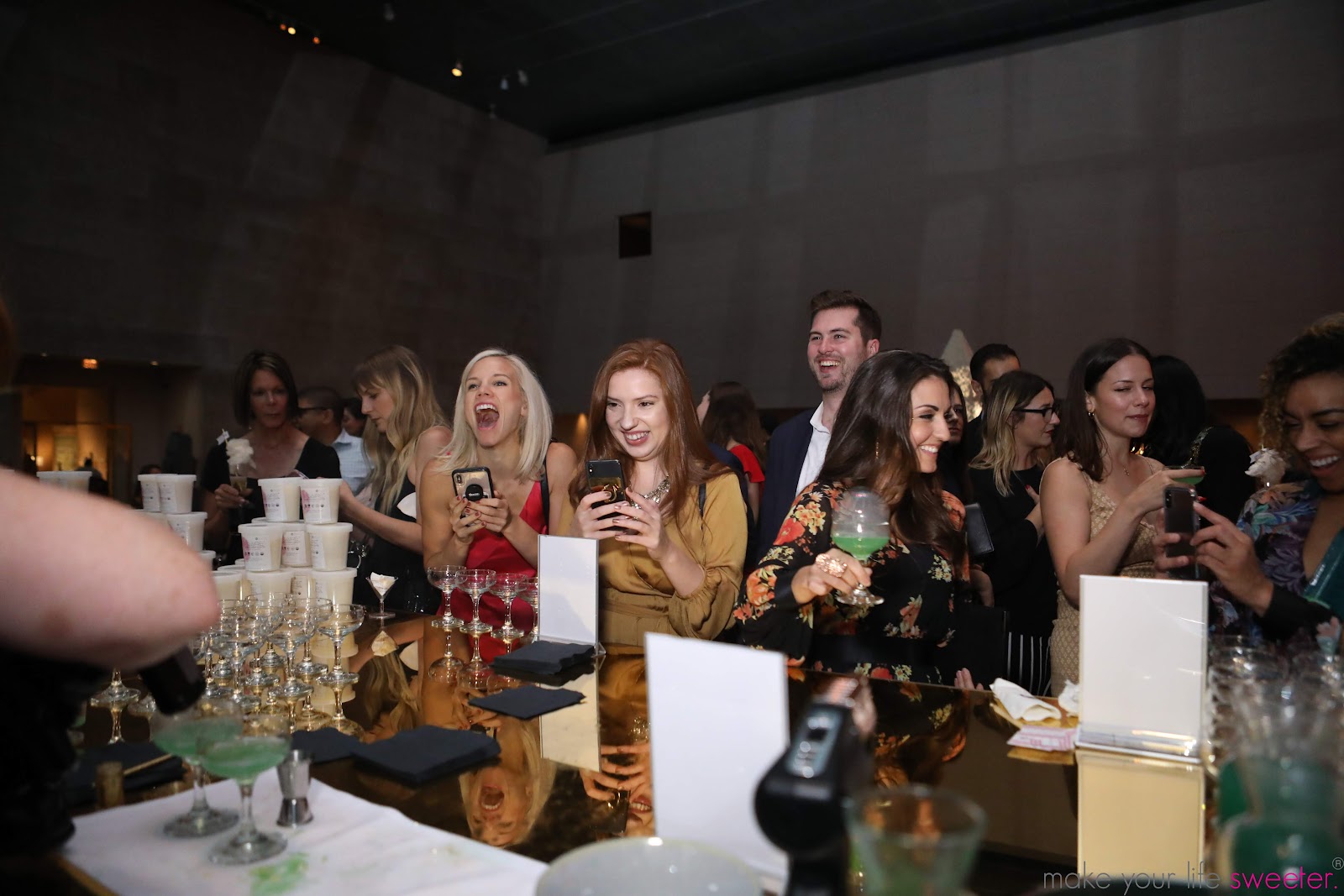 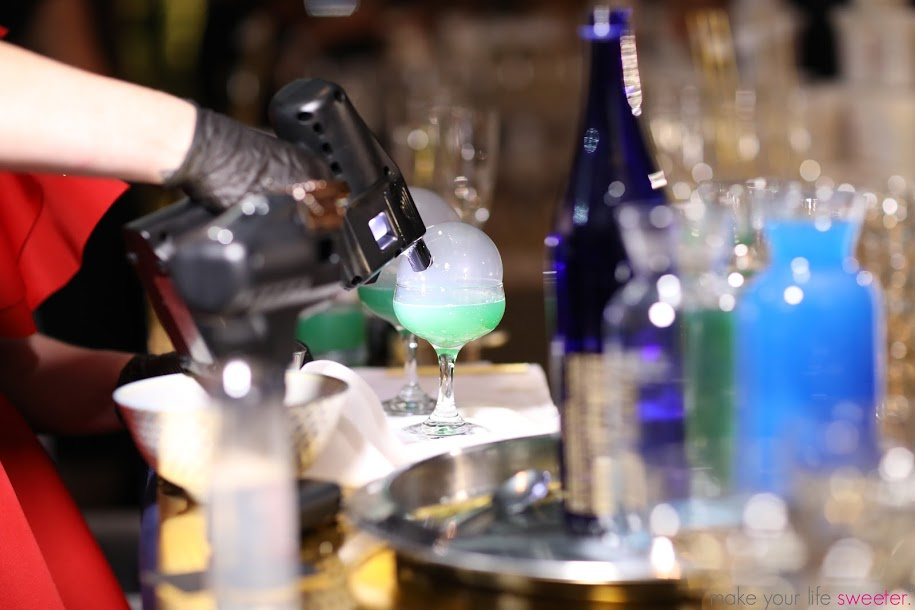 And then it caught my eye… Is that a blow torch? No, it’s Yasmeen’s newest creation, the Zphere making its debut in pure Yasmeen fashion. Zphere is an edible vapor bubble top on a mocktail and it is something to be experienced! The mocktail began aqua blue in color and then pour a splash mango nectar and, in a couple of seconds, voila! my drink was a beautiful emerald green color. Wait a couple moments more and it was topped with a Zphere. The fog that vaporizes when the sphere pops, and the infusion of mango and berry makes this drink extra magical. 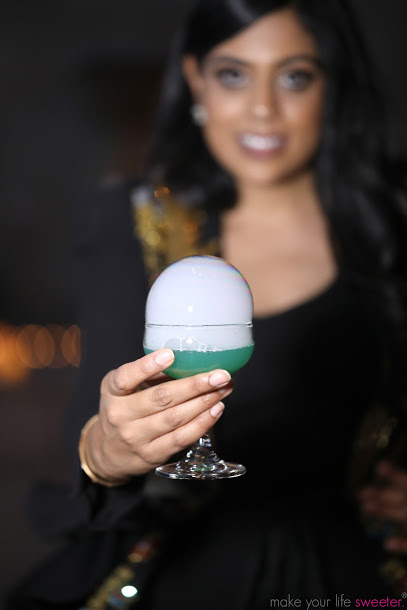 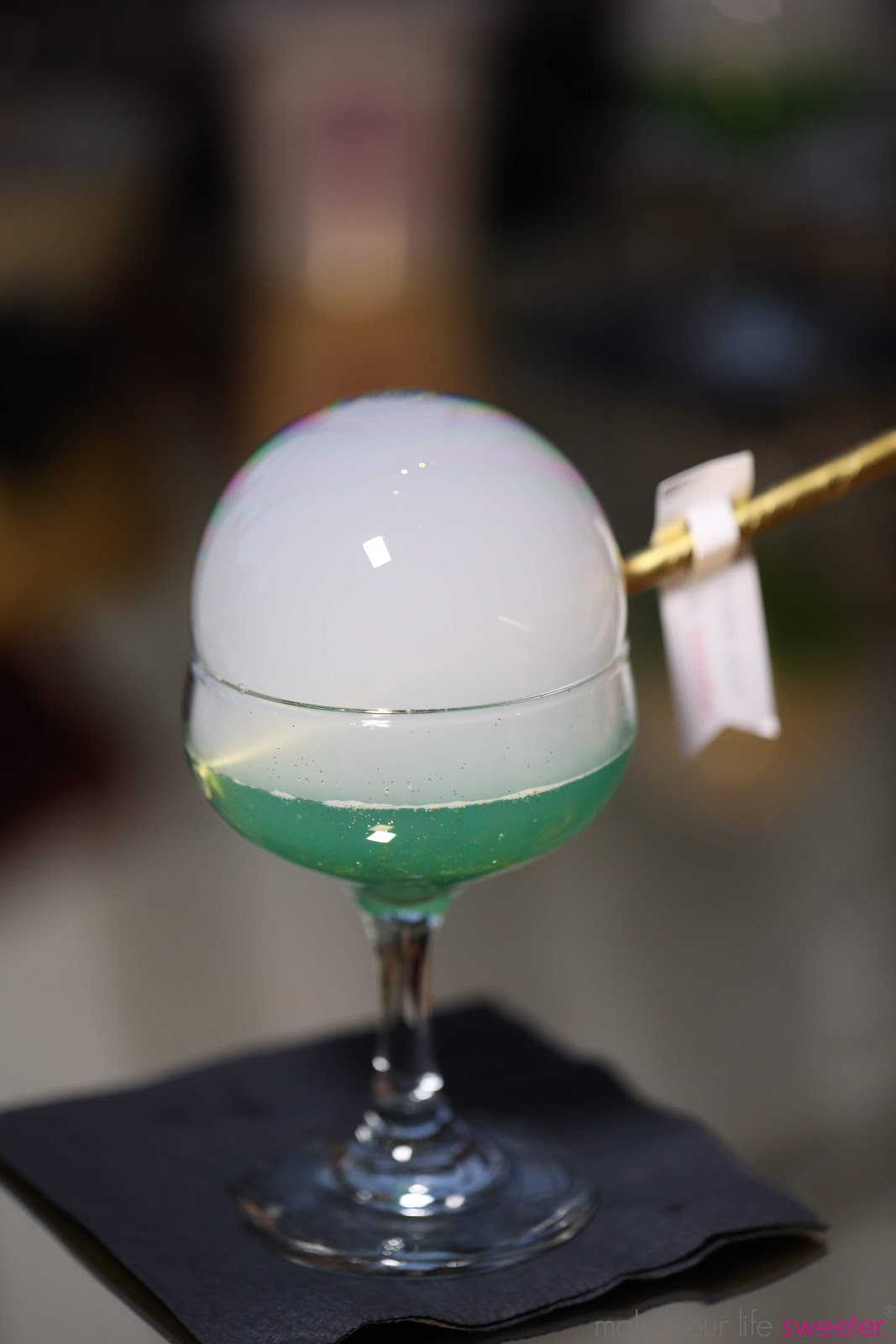 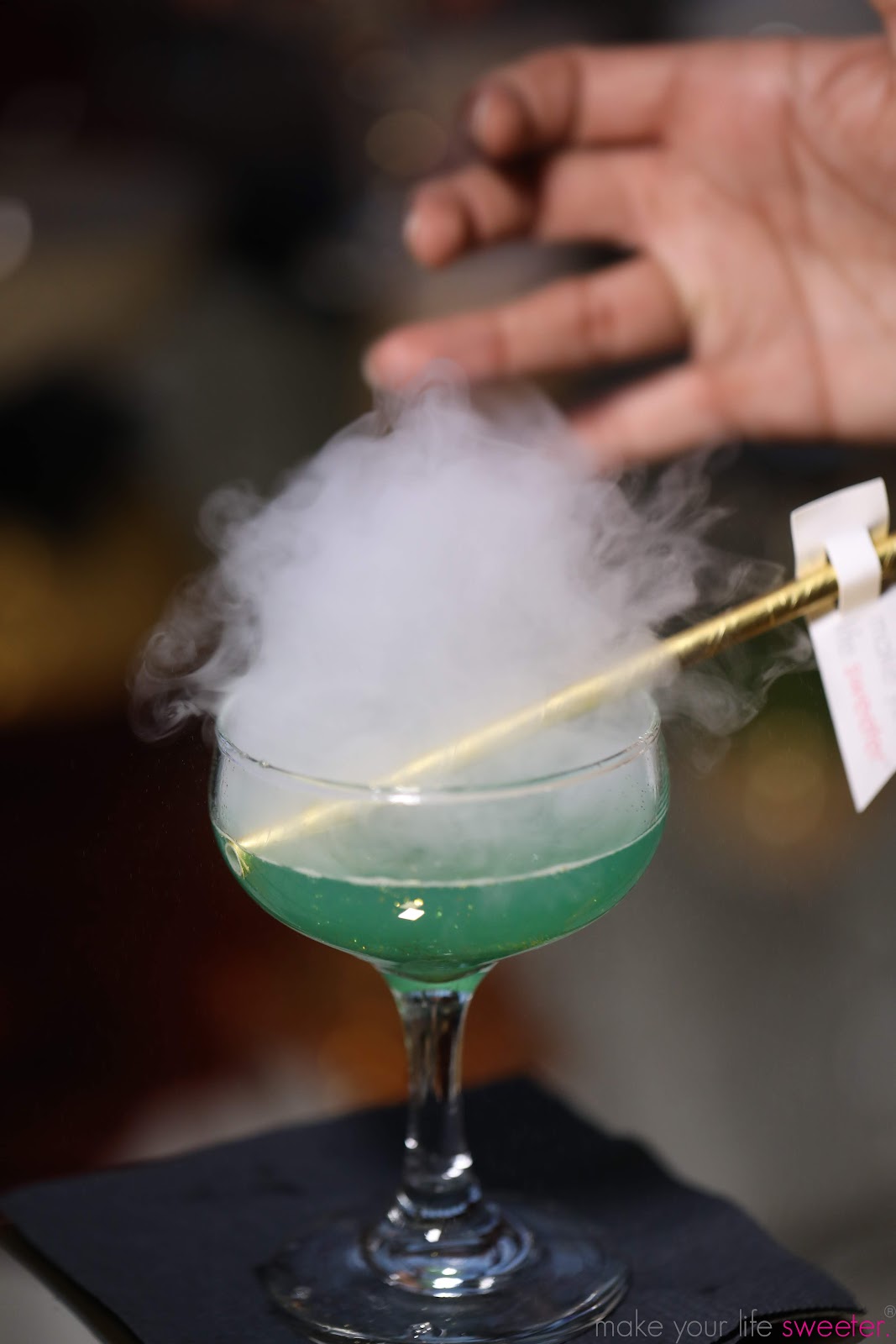 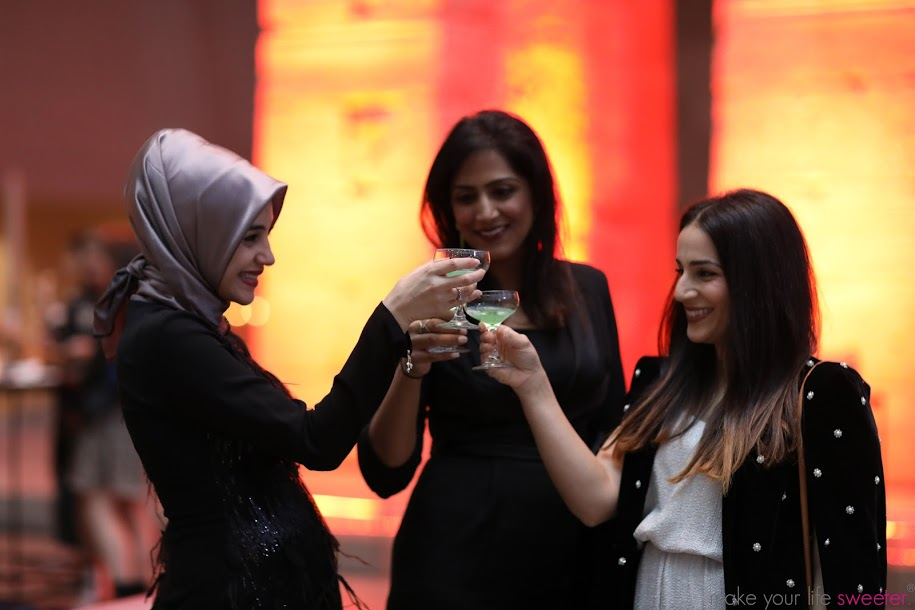 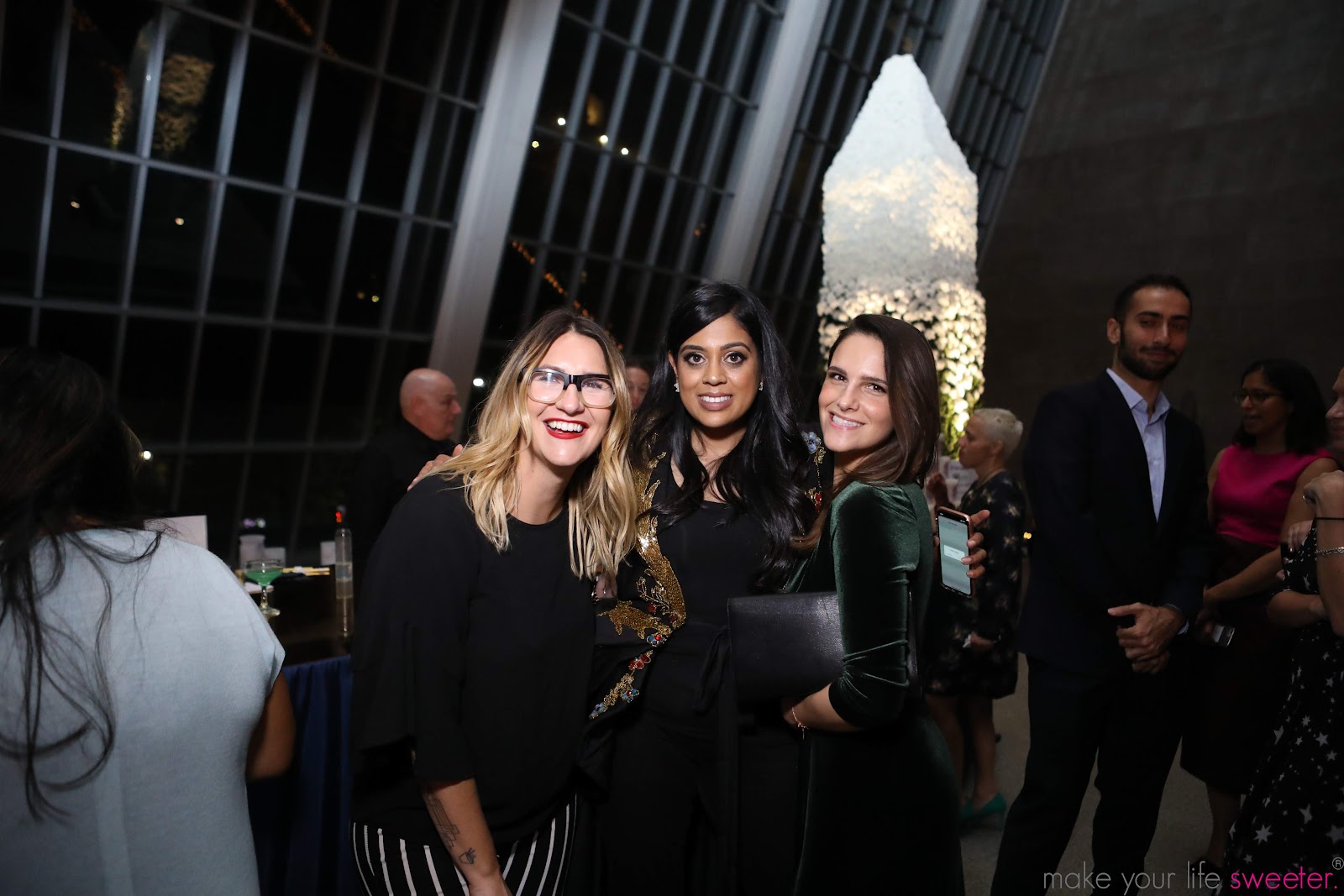 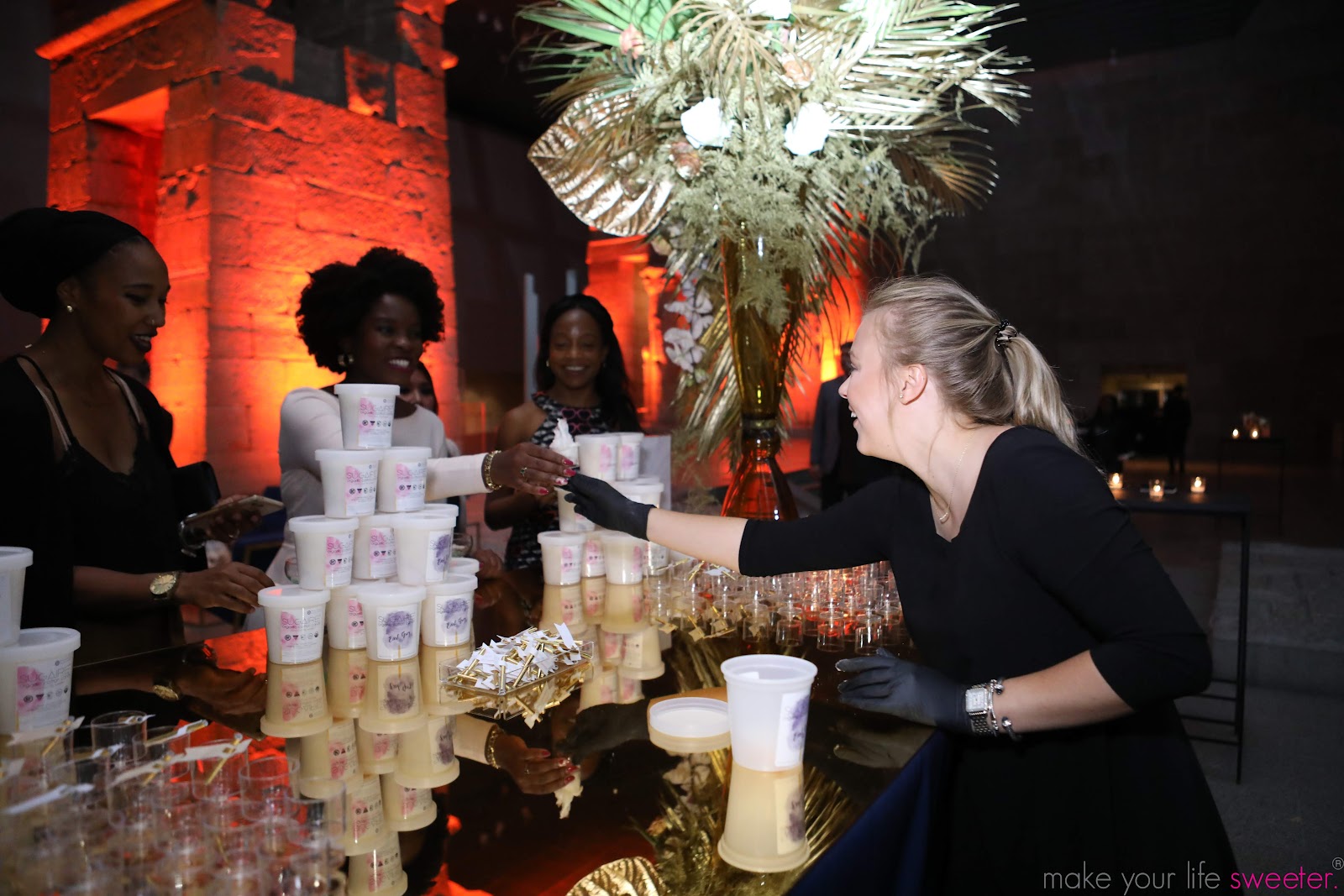 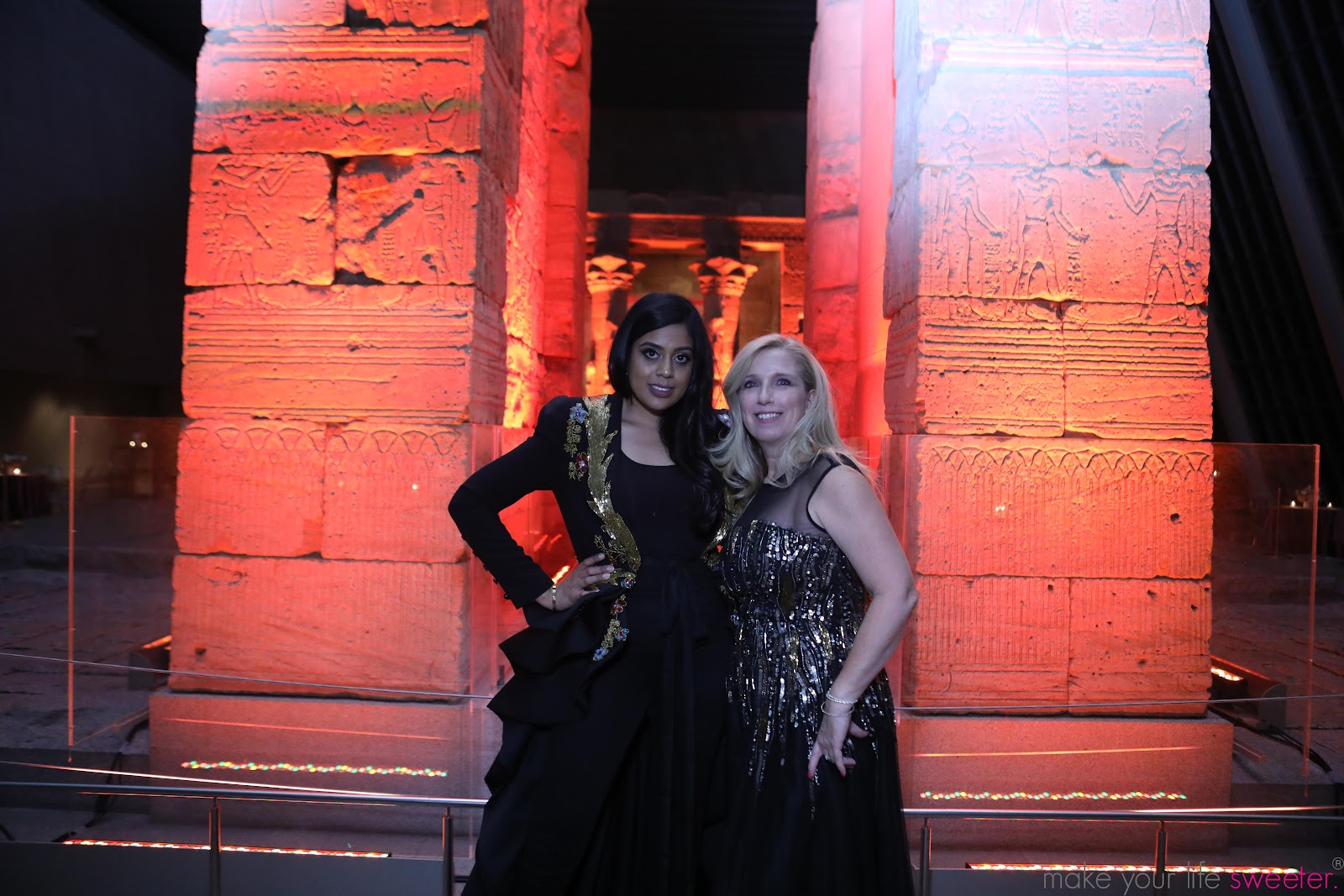 Throughout the night I indulged on South African peppermint crisp popcorn and a myriad of macaron flavors while talking to some of the guests. We mixed and mingled for hours chatting about how Yasmeen had sweetened our lives. 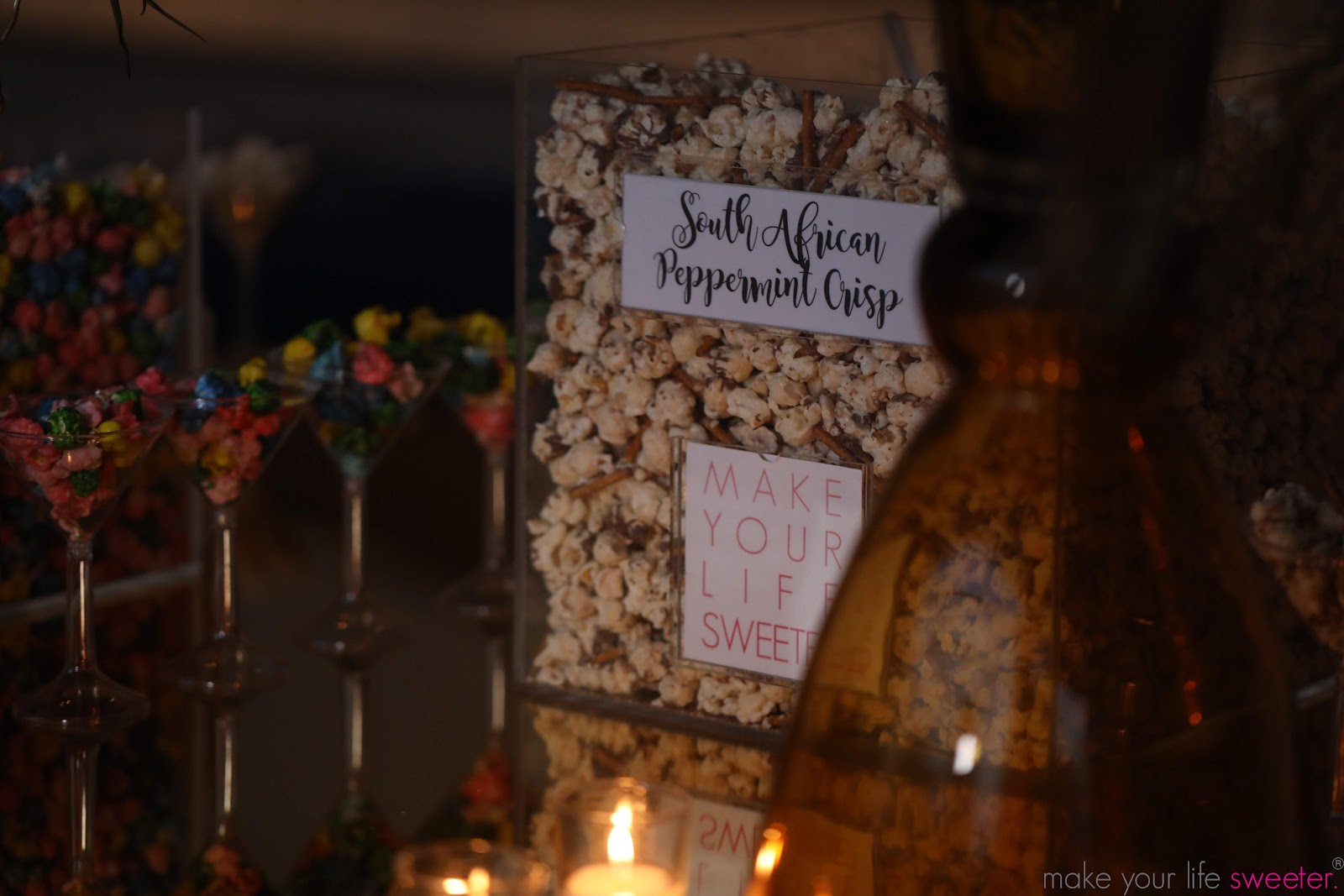 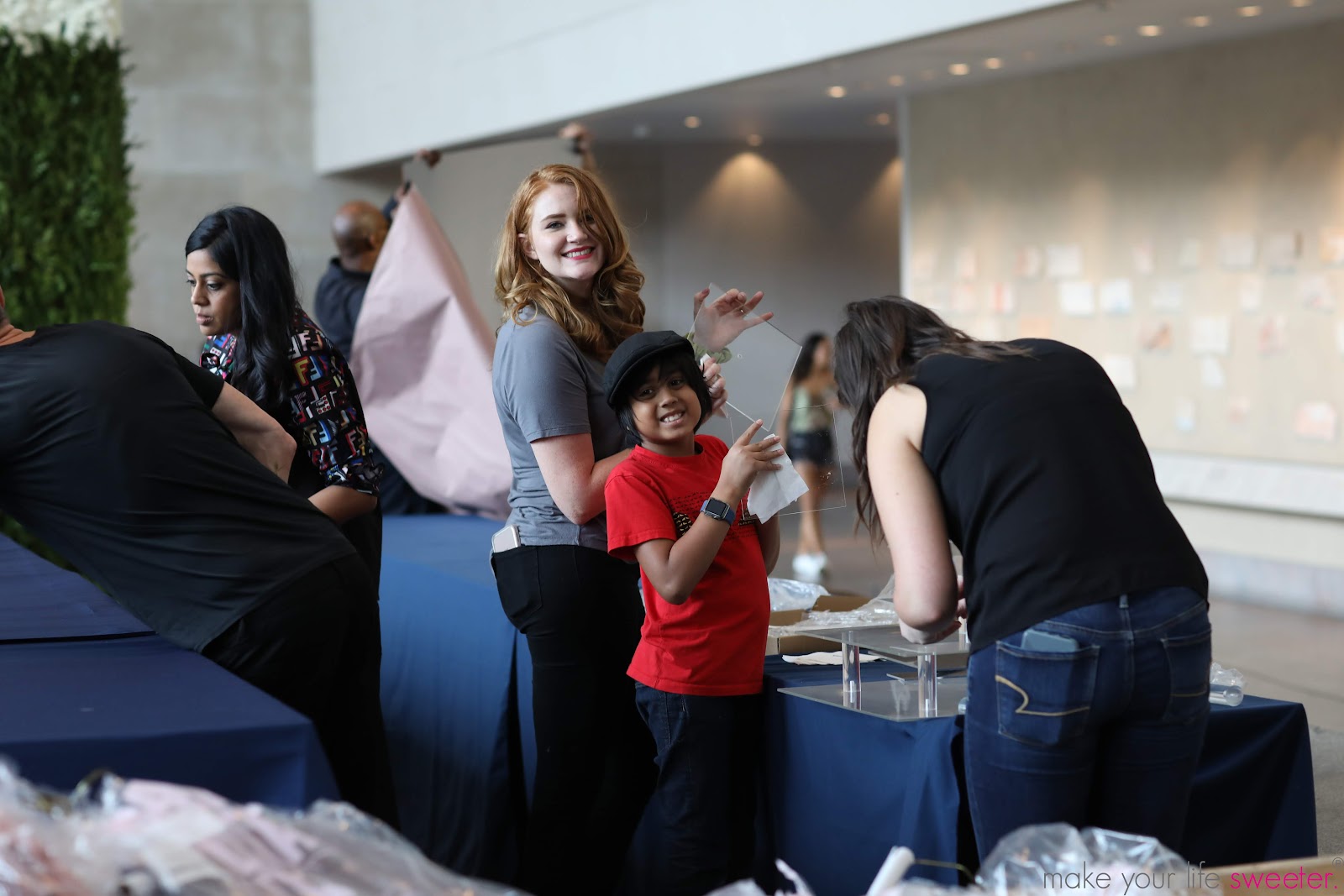 One of my favorite parts of the night was getting to see some of what happened behind the scenes. The Make Your Life Sweeter team worked together like a family. I truly understood why Yasmeen’s empire is so successful. It takes a village 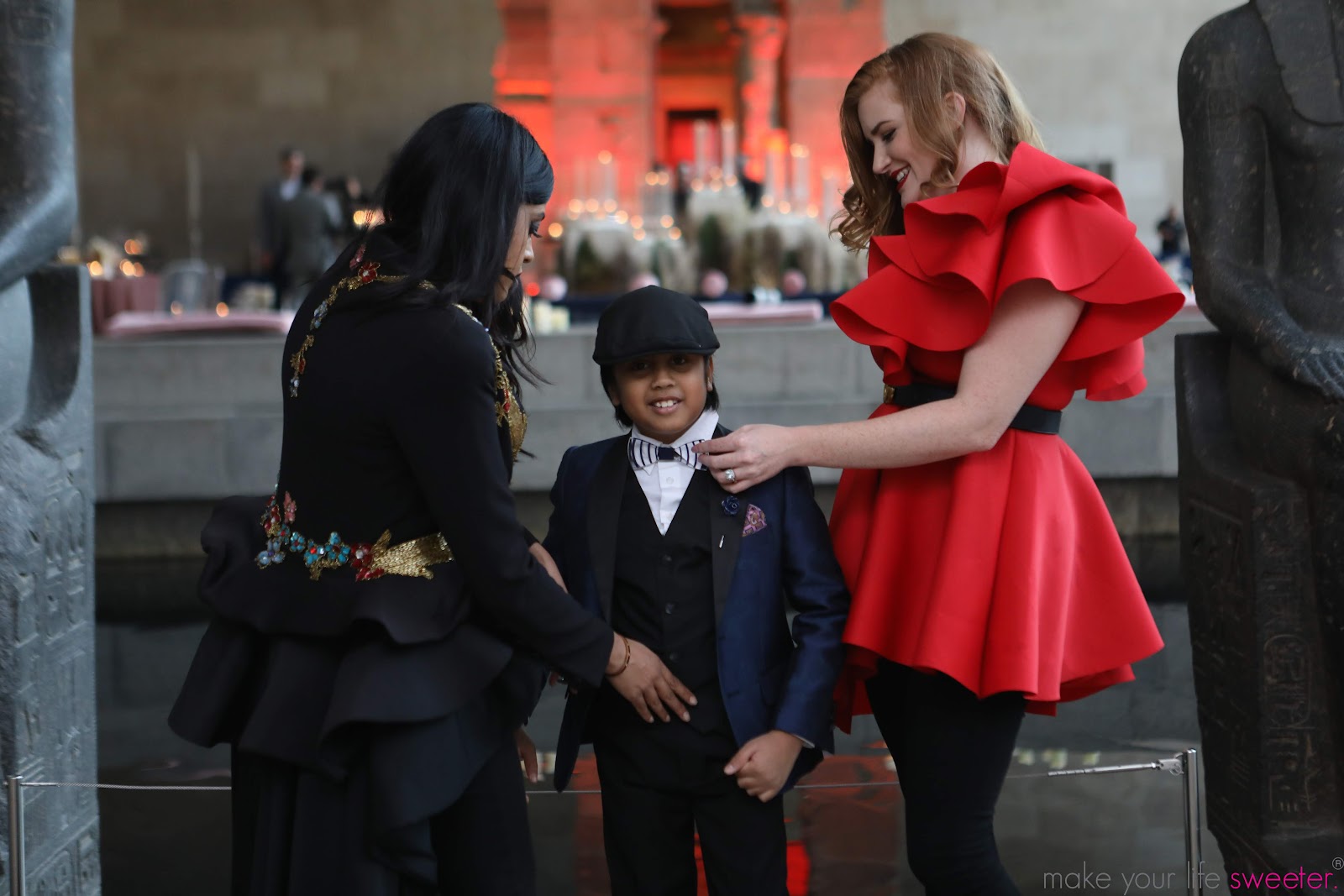 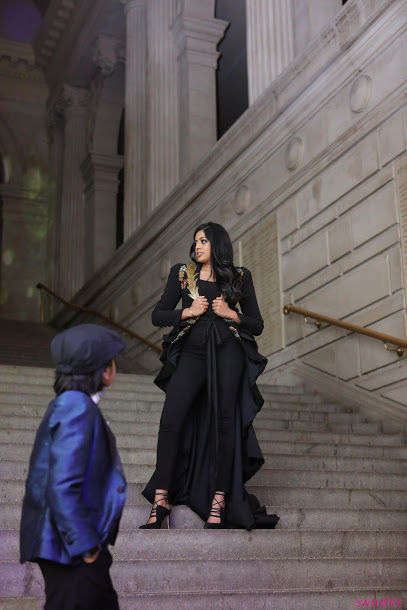 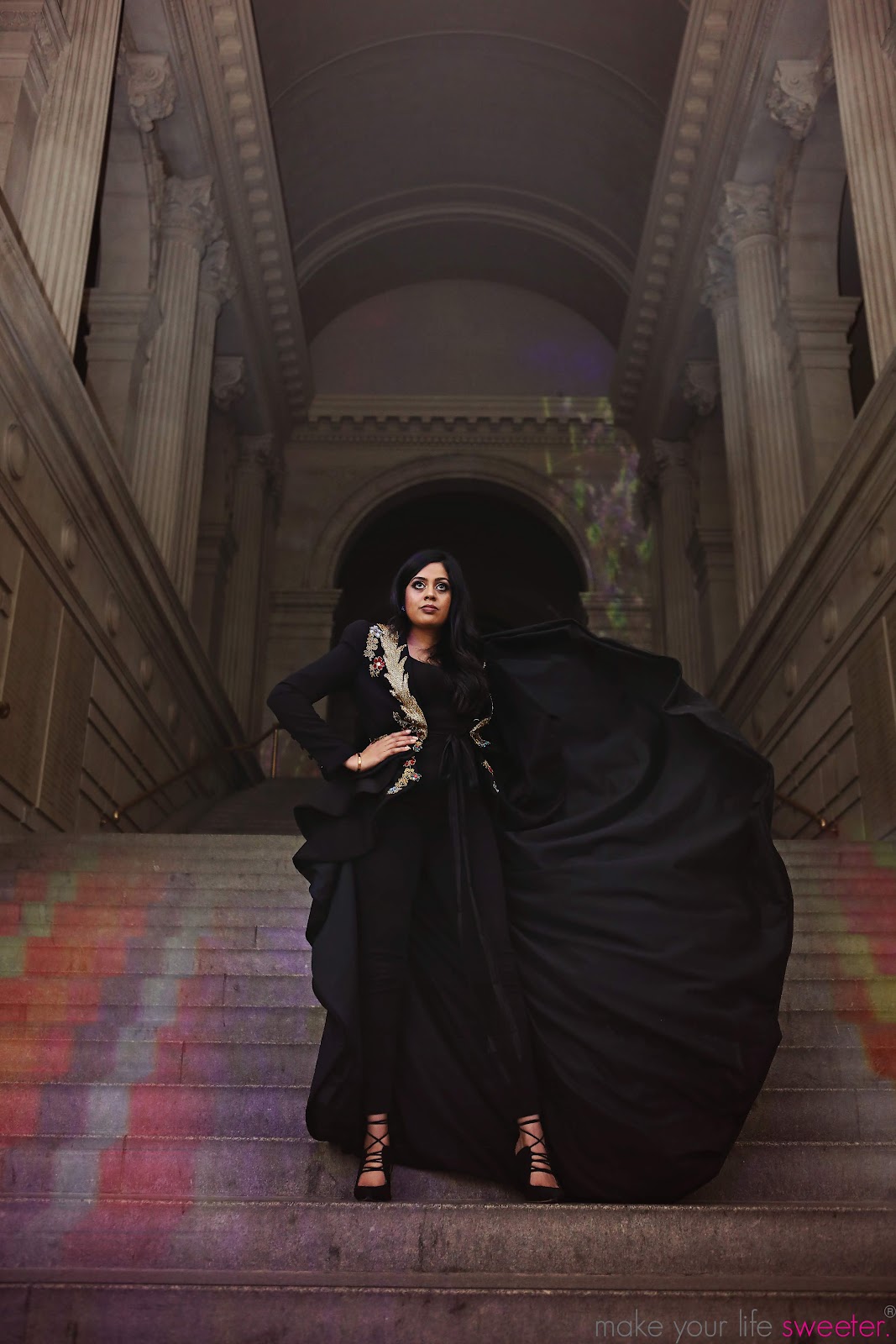 Celebrating Yasmeen’s 6 Year Anniversary in the same space that the MET Gala is hosted annually was truly a magical, unforgettable experience. What a way to toast to her success! 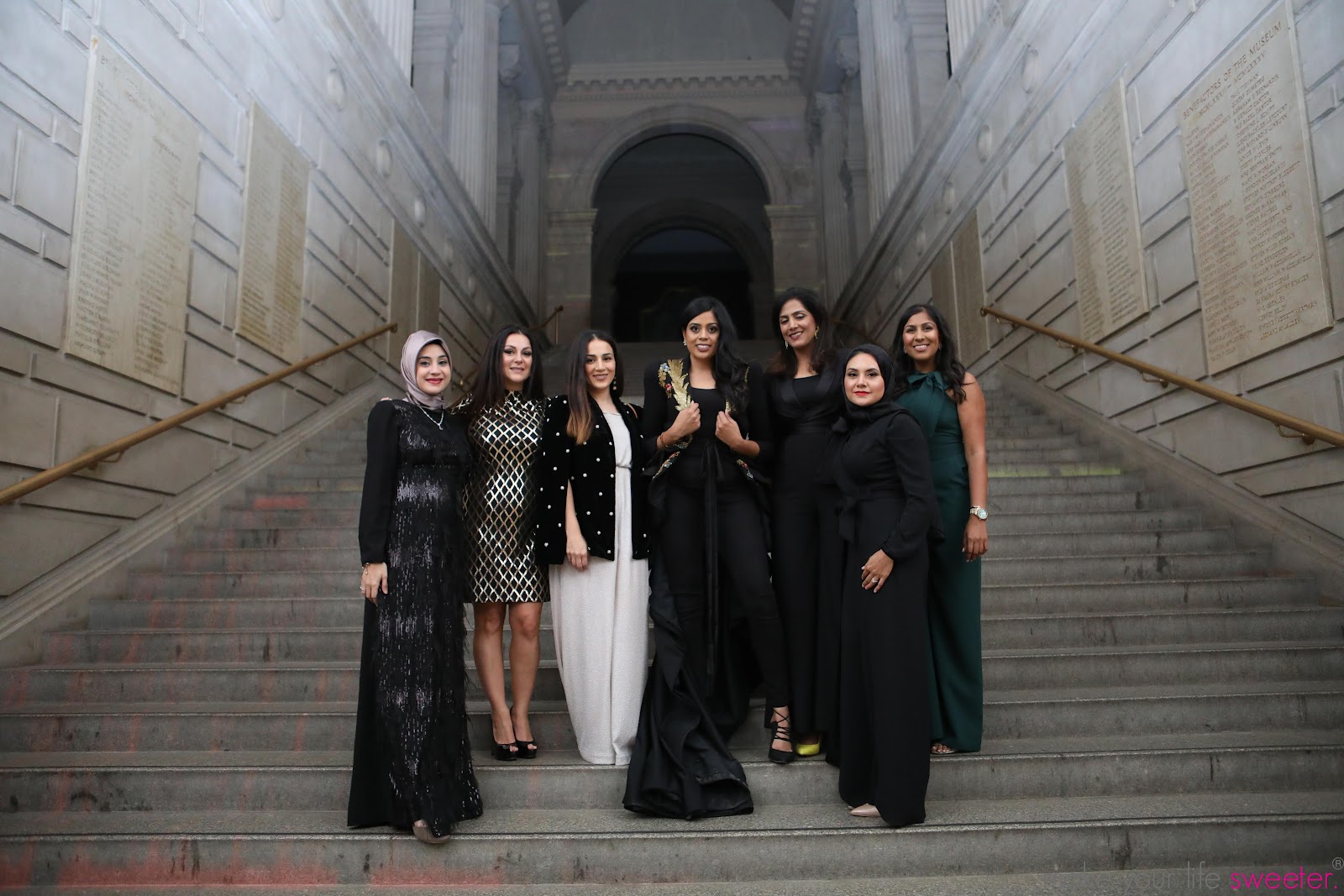 We couldn’t have confected a better evening of making lives sweeter than at the grand opening of Park Place Maserati’s shiny new Fort Worth address. La dolce vita was alive and kicking during the recent launch, where every detail paid homage to the Italian heritage of the event’s biggest star—the venerable Maserati.Hundreds of guests, including Fort Worth Mayor Betsy [...]

Few lovelier places in Dallas to spend a balmy spring evening than poolside at the residence of the even lovelier Faye Briggs. She opened her exquisite home for the third annual Light the Runway event, chaired by the effervescent Janet Fresquez and benefiting Dress for Success.Guests flitted around the expansive garden-party setting, lit with colorful, [...] 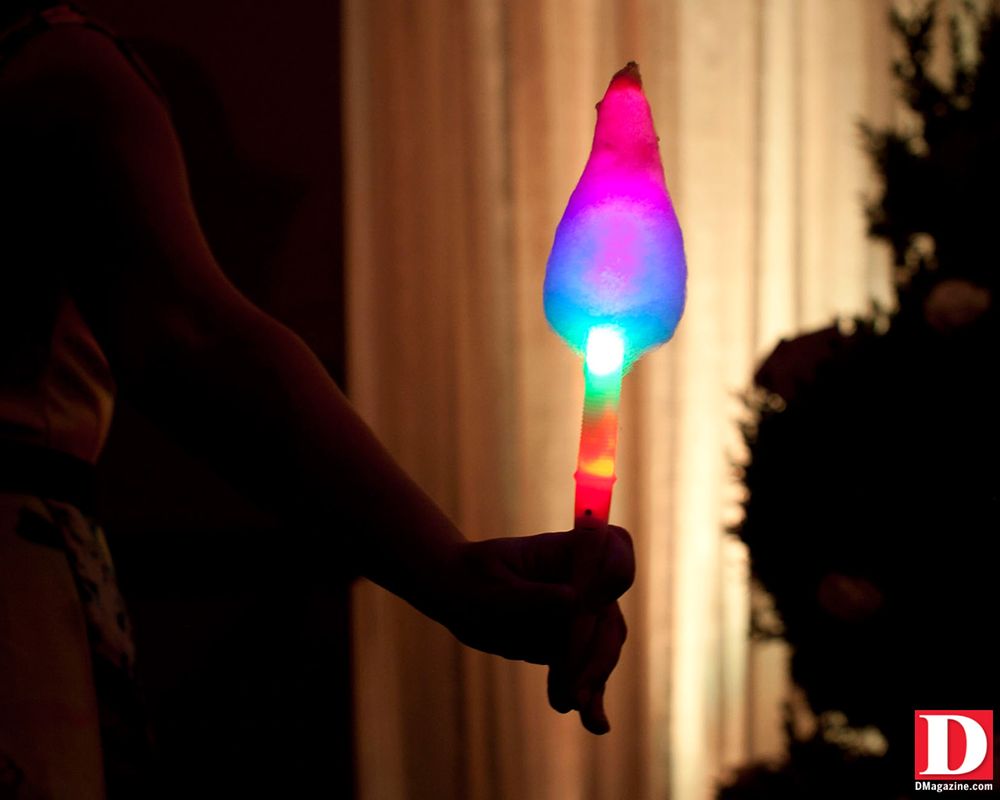 A torrential downpour that brought with it thunder, lightning, and sirens signaling tornado warnings was definitely not the way Hotel ZaZa envisioned the day that would host their annual Spring Party that ironically celebrates the return of warm weather and all its delights. The month of May is about flowers not showers, after all.Fortunately, the [...]

Tastemaker: n. (tāst′mā′kər)One who sets the standards of what is currently popular or fashionable.It’s always inspiring to be in the company of trendsetters. When those innovators are of the culinary breed, the experience becomes even more fulfilling—and flavorful. Such was the case at CultureMap’s recent 2014 Tastemaker Awards, where the top toques in food and [...] 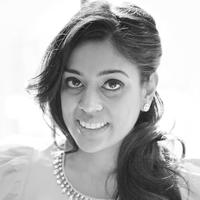 Her Story: Get to know Fluffpop's CEO, Yasmeen Tadia

Fluffpop is proud to be a diverse, female-owned company. We thought it especially fitting to begin regularly acknowledging other female biz owners with amazingly sweet companies too. We would be remiss, however, if we didn’t acknowledge our very own fearless leader,Yasmeen Tadia.The former hotelier and HR consultant recently made front page news of the SMU [...] 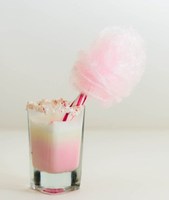 In The Kitchen: Candy Cane Fluffpop with White Chocolate Mousse

As we approach yet another fun-filled holiday season, we all look for creative ways to set our holiday party apart from the rest. Paired with a simple white chocolate mousse, Candy Cane, Fluffpop’s newest flavor creation, will do just that! Our very own Chef Antonia shares her special recipe for a dessert that will have [...] 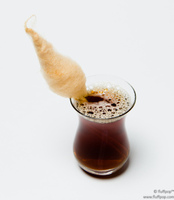 In The Kitchen: Mint Fluffpop with Citrus Green Tea

Here at Fluffpop, we are all about making your life a little bit sweeter. Fluffpop is a gourmet cotton candy company, specializing in high-end events, catering, and gifts. Our unique, organic flavors make us one-of-a-kind! Not to mention, many of our flavors are chemical and dye free. Today we want to share how we [...] 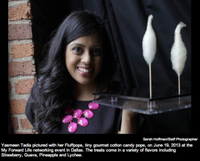 Photo Courtesy of The Dallas Morning NewsLink To Article: Fluffpop – Gourmet Cotton Candy Made in DallasWe were truly honored to be featured in their Life section in the Dallas Morning News where you will see our DJs spinning live at the My Forward Life event last month at the House of Blues Dallas!Thank you [...]

All prices are in USD.